I just noticed that last behavior too! I’m not at my PC now, but I’ll check the other issue when I get a chance.

These things should be fixed in the latest beta. Can you test if you get a chance? JUCE made some changes in its latest version that seemed to have a knock on affect on how Cabbage works with the its underlying audio graph.

Oh sorry! Will do…

2 still seems to be an issue, though it appears to be (now?) when the last csd tab was focussed, opening a new csd stops the last focussed tab playing.

Did you fix it so when a new csd is played (i.e. added to the patcher window) it doesn’t stop the previous focussed csd? if so, that seems to be fixed.

p.s. the csd tab that will stop playing has to be focussed when you open a new file

I’ve pushed through some changes now that should address these issues. Results should be available here shortly.

Would be great if you can give this a going over. I’ve not had much time to test it. Thanks again.

2 seems to be fixed now

but the stop button no longer works for me

I had to laugh out loud when I read this. I knew they’re must of been a good reason for the stopCound() function that I removed. Now I remember what it was for

I just pushed a fix to git now. Sorry about this. I knew something wasn’t quite right with the changes I was making. I only briefly tested this, so be forewarned that you may well hit issues!

Hi @rorywalsh sorry to say, but the tabs issue has crept back in, whereby the focussed tab stops playing when a new csd is loaded.

Also noticed some oddity when I load some patches, other tabs start referencing adjacent tabs. I have to quit to reset it! I think it’s something to do with the patcher and tabs losing 1:1 ref connections (only way I can describe it)

Darn it. I thought I had stamped that one out. Thanks for the feedback. I’ll take a look into this shortly.

Did you have much luck with this one @rorywalsh? That AU stuff looked a bit gruelling to pin down

Just looking into it now

Hi @rorywalsh sorry to say, but the tabs issue has crept back in, whereby the focussed tab stops playing when a new csd is loaded.

I’m struggling to recreate this problem here. Would you mind creating a gif, or sending me exact instructions to recreate the problem?

Also noticed some oddity when I load some patches, other tabs start referencing adjacent tabs. I have to quit to reset it! I think it’s something to do with the patcher and tabs losing 1:1 ref connections (only way I can describe it)

I’m seeing quite a few issues with loading of patches here on my end. This looks to be a side-effect of trying to make all instruments relative to the patch file. My bad…

I pushed through some new code there. Can you try the latest build when you get a chance? I still couldn’t recreate the problem you were having with nodes turning off?

here’s a vid for the first problem https://www.dropbox.com/s/b7l0of4sjeojy4g/stopplay.mov?dl=0

apologies for the rude file path

Can you try this one. When I follow the same steps you do I don’t have any issues with instruments turning off?

Great! Seems to be working now.

The patcher cabbage file recall seems to lose its references however. Might be a regression. This is on the latest 2.2.35 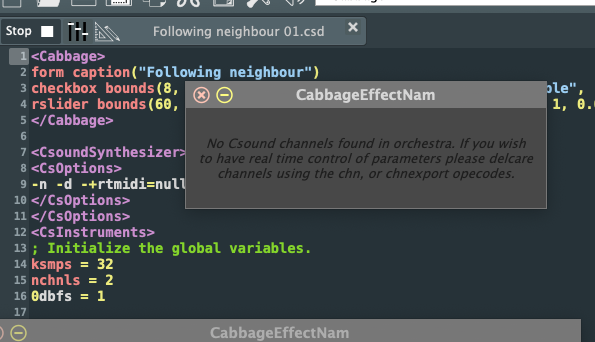 Can you try saving a new patch and opening it. I think the older patches might have issues. There wasn’t much I could do with it. There was a clearer bug that needed fixing