JUCEJack lacks an output in Arch

To summarize, when JACK is selected as the audio device, JUCEJack doesn’t seem to talk properly to the rest of the JACK environment. It doesn’t have the option to connect out to system; on both of the computers I’ve tried this on, it only lists the PulseAudio JACK sink as an output option, but doesn’t actually output audio to it if that option is selected. Its appearance in the patchbay (Catia, in this case) is strange, with only stereo in and no out. Because of this, I am unable to get sound out of Cabbage through JACK (or at all, right now, since the other option ALSA doesn’t seem to want to send sound over HDMI which is the only way I can get it). 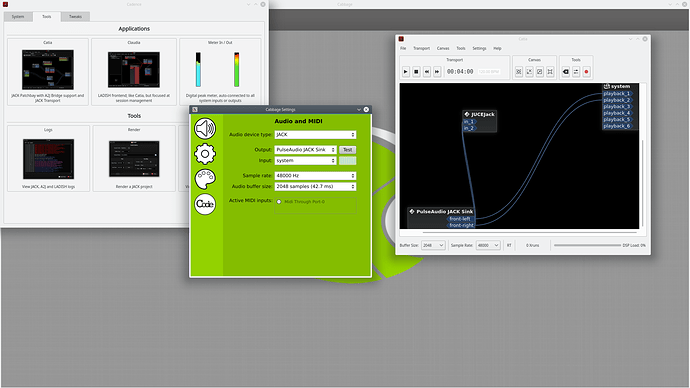 That’s more or less the exact same setup I have here yet I don’t have any issues. What happens if you try to save an instrument first, and then go to change the settings?

Huh, it doesn’t seem to make any difference. If I save an instrument, the instrument starts running, but the audio settings stay the same. I wonder what’s going on.

So, the behavior I’m observing is basically identical to that described in this thread on the JUCE forum. There’s some good news in this—if I disable output in the Cabbage audio settings so that the output ports appear on the JUCEJack module in the patchbay, and then manually connect the module to the system in, I can sometimes get sound out of it. Sometimes Cabbage crashes when I try this, but if I try repeatedly it seems like I can get it to work, so that’s great. Here’s what it looks like:

It’s too bad that that thread didn’t get very far, though.

I’m glad you found a solution of sorts, but its not great. I’ll take another look when I get a moment.

So, with the latest commit of Cabbage, things are a little better on my system; the Audio and MIDI settings panel displays output channels for JACK, so I don’t have to use the patchbay:

Unfortunately, Cabbage is still very unstable in this configuration. It crashes when I start an instrument about a third of the time.

There is a big in the current git tip. I tried desperately to fix it before I left for a short vacation, but couldn’t find an elegant solution. I’ll be able to look into it again later this week. I’ll let you know.

Oh, that’s okay, thanks so much for all your hard work on this! I’ve been brushing up on my C++ and the workings of JUCE, so hopefully soon I’ll be able to contribute more deeply than just with bug reports and shell scripts.

I think this is fixed now and the latest master branch should be stable again. Can you let me know? I had to update the entire audio graph when updating to the latest version of JUCE. I missed a few little things which were causing the node connections to get messed up. Try it out and let me know

p.s. this version causes an assert on exit when run as a debug build, but it’s nothing to worry about. I will clean that up when I get a chance to delve into it a little more.

So, lovely news, Cabbage seems to be stable again! Since the latest commit it hasn’t crashed on me once. The audio settings panel looks the same as before, but it has all the necessary stuff so that doesn’t really bother me. Thanks so much!

Happy days. Thanks for testing