With a lot of help from Rory, I’ve been able to get my code working in Cabbage and achieved an FMOD Plugin export. I’ve got it working in Unreal with the FMOD Integration, but I’m having some other issues.

I just used a start FPS project and a single FMOD event with the plugin instrument included.

Thanks Chris. I’ll take a look when I get back. Have you tried experimenting with ksmps values?

Are you using fmod because of everything it offers in terms of sound design, or simply to use Csound in UE4, if it’s the latter you might be as well simply calling Csound directly using C++.

Hey Rory, I’ve tried out different ksmps values but I’ve found a further problem in that FMOD crashes after playing the event and stopping it a few times. Looking into the crash logs, looks to be a Access Violation, lack of memory and output buffer starvation.

The doubling seems to act independently from FMODs mixer. If I mute the instrument channel, put the gain of the channel and master channel to zero. Everything’s at zero, yet the instrument plugin’s double is still audible.

I’ve pulled up the profiler and the single event firing, even when not triggered takes up 230% DSP for a split second and holds at 55-60% for both DSP and CPU until the event ends. 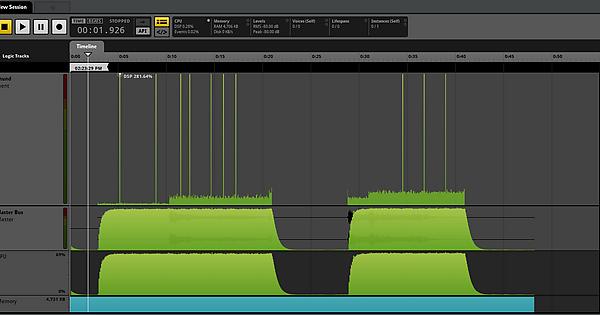 Thanks. I’ll definitely look into this when I get back.