No Sound in Build for Apple Silicon

I used the Rolling Ball Unity Tutorial and Rorys Youtube Video for the same project to get to know CSoundUnity. It’s very intuitive to work with, so I managed to get a basic soundeffect (with varying parameters dependent on the collected tokens ingame) working very quickly.
If I build specifically for macOS Intel 64-bit, it works great. But if I build for macOS Intel 64-bit + Apple Silicon, the ingame sound does not work anymore (even if running the app on a Intel 64-bit machine). Also someone on the forum reported, that CSoundUnity should work fine with Apple Silicon builds: Mac M1 CHIP

Is this a issue specifically for building to macOS Intel 64-bit + Apple Silicon “combined”?

To my knowledge, the arm64 version of Csound is currently not integrated in CsoundUnity, which is why the Unity x86-64 builds work with Csound and the Silicon ones do not.

It seems like CsoundUnity does not support universal builds with arm64. I wonder if running the two components, i.e. Csound and Unity, on different architectures concurrently would be possible at all…

Hi,
I have replicated the issue, and I can confirm that an Intel build works on a M1 Mac.
I have tried building for Intel+Silicon and indeed the Csound.bundle is not copied into the final build.
Can you open an issue on GitHub?
I’d like to keep track of this issue

To my knowledge, the arm64 version of Csound

There is no arm64 version of Csound yet, at least not an official one. So Csound and Unity can’t support universal builds. However, I maintain my own universal build of Csound which you can try. I don’t have access to my mac right now, but here is a version for Csound 6.16 I think. Note that this is a bare-bones build. It’s missing a lot of plugins, but it should indicate whether arm64 will be an issue moving forward.

I know Victor is after getting an arm64 machine so I guess it won’t be long before Csound has an official universal build.

Using an Intel Unity Editor (so running with Rosetta on my M1 Mac):

On a Silicon Unity Editor:

Like Rory says, we need to wait for the Silicon version of Csound.

Also there will be some issues with security permissions

Plugins will be checked the first time they’re loaded.
This is what happens on the first load of the CsoundLib64: 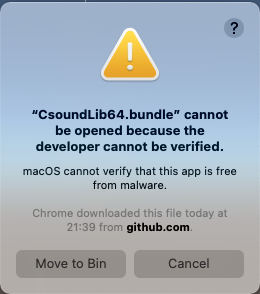 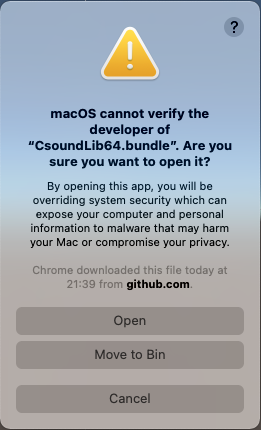 Thank you guys for the detailed and quick answers everybody!

Can you open an issue on GitHub?

Since you already isolated the problem and cause in your last post, should I still open an issue on github, @giovannibedetti?

I will, no worries!
That’s in case I have to link the issue on the csound repo

(I was on a hurry when I wrote that post